Currency Point: Where to for the AUD?

Currency Point: Where to for the AUD?

501
SHARES
1.4k
VIEWS
Share on FacebookShare on TwitterShare on RedditShare through Whatsapp

We have been strong, on the idea, that the AUD is starting to find support against risk-off counterparts.

The best example of this is AUD/JPY. The cross is up solidly, and has been a trade that we have let run and continue to let it run as global growth improves and emerging markets begin to expand again.

Looking forward then, what’s next for the AUD?

With the China-U.S. Phase 1 trade deal now signed, sealed and delivered, the AUD will need to see Chinese growth accelerate throughout 2020 if it is to break out of its downtrend against the likes of the USD and GBP.

With China’s Q4CY19 GDP coming in at 6.1% this is unlikely to be catalyst against these peers, and why would one argue that looking at the AUD looks outside the norm. Caveat being there is a clear $0.6750 creating a strong support line for AUD/USD.

Domestically Aussie data is improving which is not what one would expect if economists and market pricing are to be believed. New home loan sale rose 1.8% year-on-year in November beating expectations and shows that the house price trend of 2019 is filtering through to supply. Sydney and Melbourne did just record an annualised pace of growth above 20%.

None of this should be a surprise, however, as the 3 rate cuts by the RBA in 2019 and the prospect of a further 2 in 2020 is fuelling house price demand and has been a major reason for the AUD’s decline. And although housing data and future activity surveys such as construction and PMIs are on the improve; make no mistake wage growth is still anaemic and consumption continues to splutter along.

That is why this week’s employment data are so important as it may actually all but confirm the RBA’s first meeting of 2020 is a ‘rate cut’ one. Why? Last year the RBA used the slowing employment market as justification for its 3 cut movement. If Thursday’s data confirm that employment is still slowing the RBA should cut using its recent logic.

The market is pricing the probability of a cut from the RBA at the February meeting at over 50% due to the horrible bushfire season and the effect it will have in the short term on the economy. Markets are pricing in a 90% probability of a 25-basis point move by May, a poor employment read will bump that to 100% and could see the February pricing at over 70%.

Now the caveat here is if the data is fine and this lead to the RBA to hold out on cutting rates further, the decline in the AUD over the past year will like unwind and quickly.

Yes, this could manifest in AUD/USD and even GBP/AUD. But the best cross will remain AUD/JPY and adding to this long position on pull backs will be the best option for those looking to trade the AUD in the near term.

The post Currency Point: Where to for the AUD? appeared first on FP Markets. 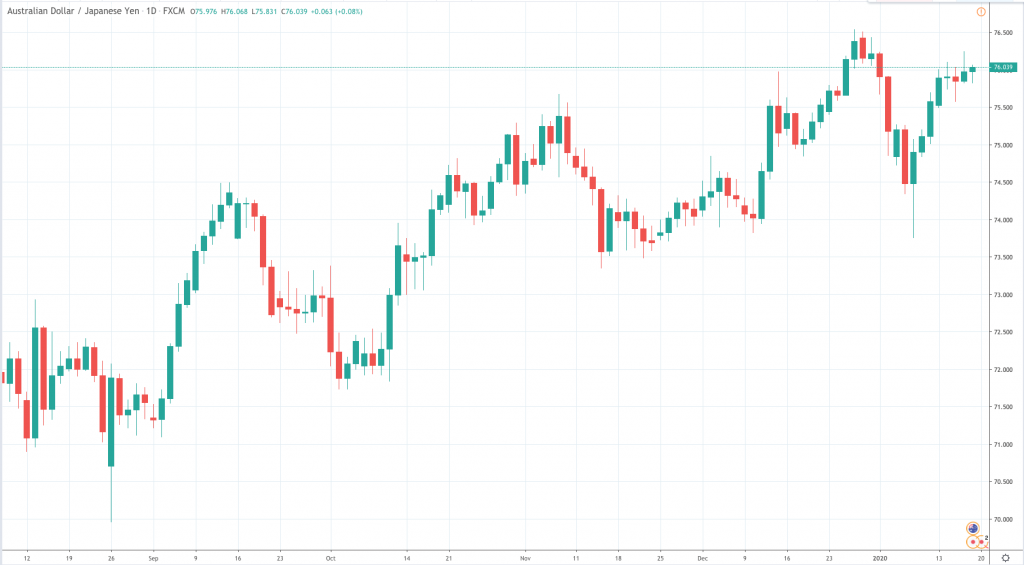