Adam Vettese, UK Market Analyst at eToro, has provided his daily commentary on traditional and crypto markets for February 28, 2020.

The global market sell off shows no signs of abating and markets are set for their worst week since 2008. European markets have seen heavy selling at the open with the FTSE100 down 3.7% and the DAX down 4.5%. Fears are growing over a global pandemic as 10 new countries have reported their first cases of the virus. Due to the indefinite timeline the situation presents for containment, investors have continued to flee equities and seek the safety of bonds and other safe havens such as the Japanese yen. 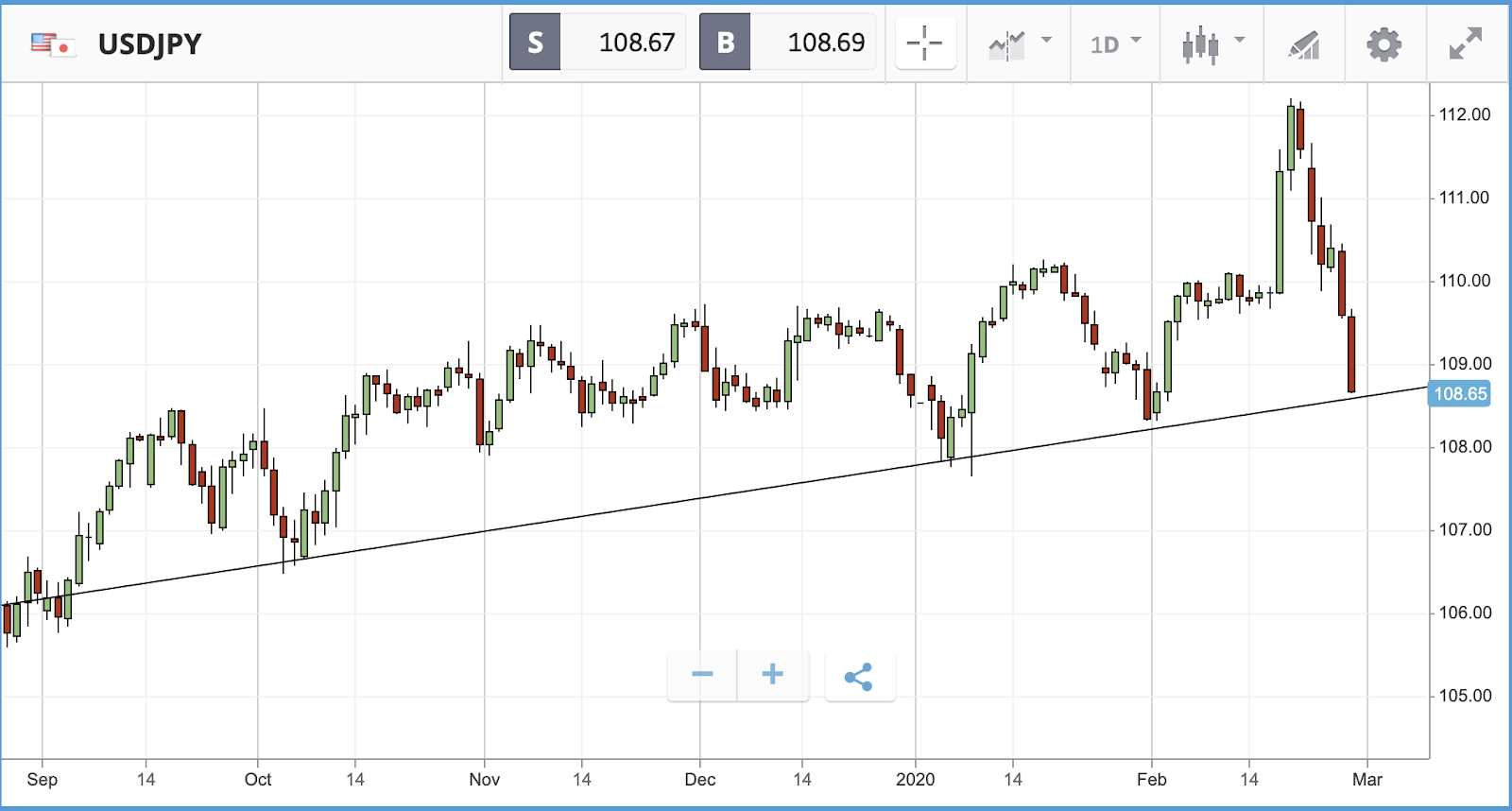 Yesterday the Dow Jones Industrial Average index fell by 1,191 points, or 4.4%, as share indices across the globe entered correction territory amid heightening worries about the economic impact of the coronavirus outbreak. The points loss was its biggest ever fall, although in percentage terms it is someway off its largest ever one-day drop. 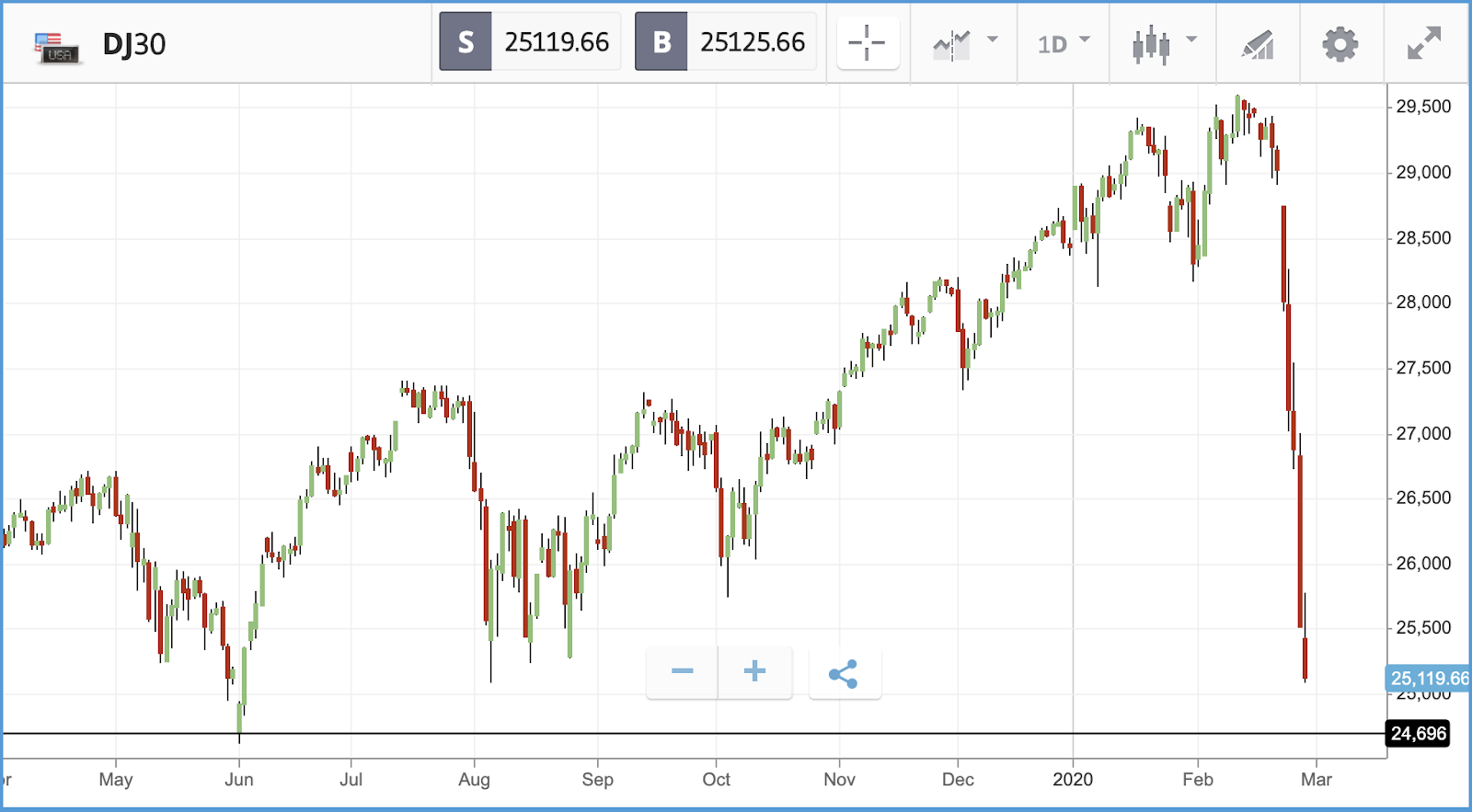 The S&P 500 also posted its worst single day since 2011 yesterday with a 4.4% drop. This week’s sell-off is becoming the fastest ever move into correction territory (a fall of more than 10%) from a record market high, having taken just six days. At lunchtime yesterday the index of America’s largest companies had recovered from earlier lows to around a 1% loss for the day, but sank rapidly in afternoon trading, falling more than 3.5% between 1pm and 4pm. The sell-off was preceded by the news overnight that the rate of new coronavirus cases in the rest of the world had overtaken the rate in China.

While travel names such as American Airlines fared poorly as they have done this week in general, it was tech stocks that plunged the hardest in yesterday’s sell-off. Tesla dived 12.8% after published data showed that its China sales had fallen. Apple and Microsoft dropped by 6.5% and 7.1% apiece. Microsoft’s fall came after its announcement late on Wednesday that it would miss revenue targets due to the disruption caused by the virus. All but one of the 30 stocks that make up the Dow Jones Industrial Average posted a negative day, with Boeing, Intel and Procter & Gamble all ending more than 5% down.

IAG admits it cannot forecast profits due to coronavirus

International Consolidated Airlines, parent company of UK flag carrier British Airways, released an update this morning in which they admitted they were not in a position to provide guidance on 2020 profits due to the continued spread of the coronavirus. The numbers didn’t actually read too badly but that has not managed to prevent a further 8% fall in the share price this morning. The worrying thing for those who already own IAG shares is that there is no telling how long the Coronavirus outbreak will last and what level of disruption it will cause to IAG’s revenues. 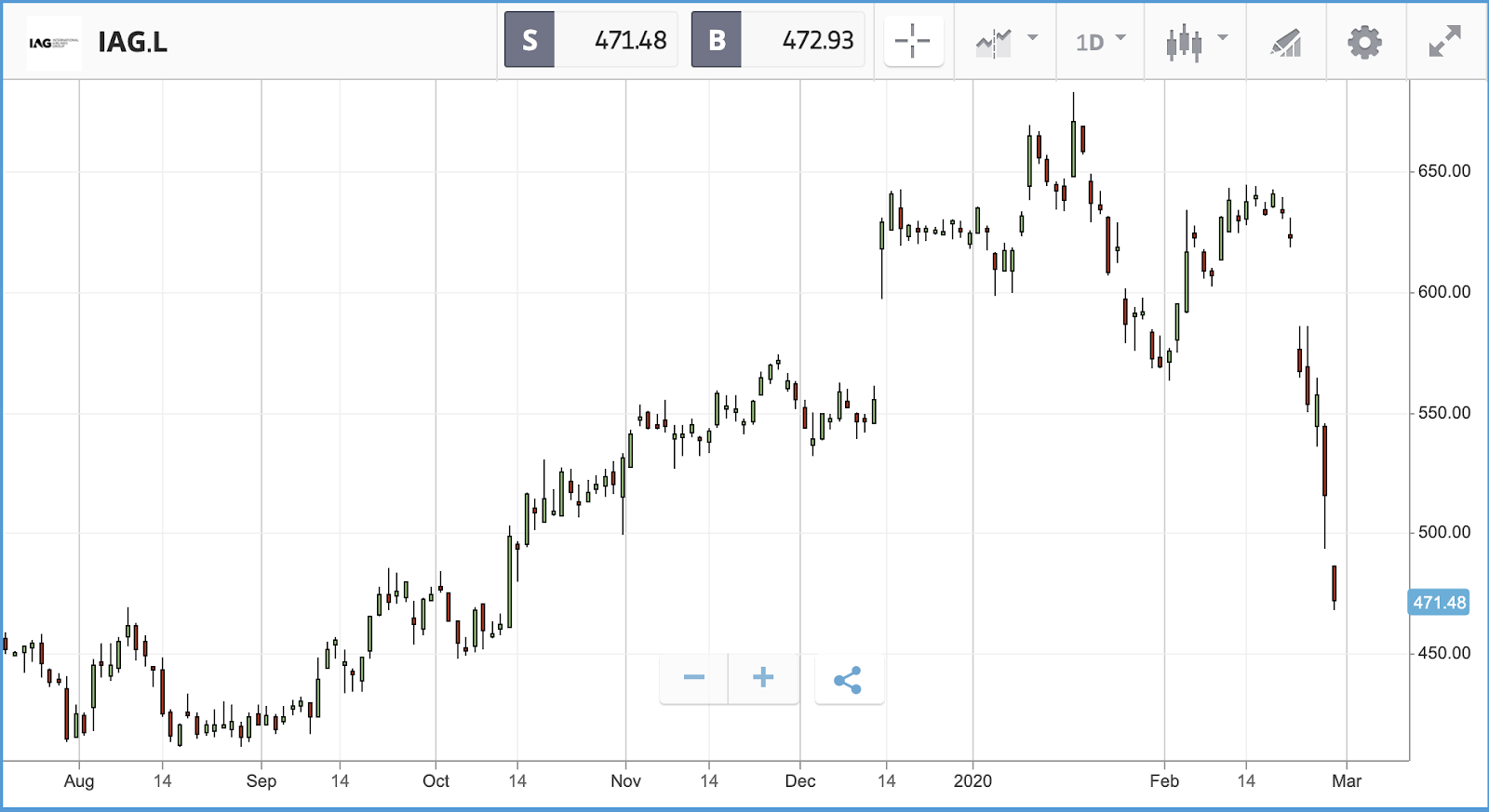 One relative bright spot yesterday was Marriott International, which posted a flat day after CFO Leeny Oberg said on the firm’s fourth quarter earnings call that it is reopening hotels in China. Meat substitute company Beyond Meat also delivered earnings yesterday, beating revenue expectations but failing to deliver its second profitable quarter in a row. The firm tripled revenue in the fourth quarter, but still posted a slight loss, with shares poised to open lower today in reaction. It was thermal imaging company FLIR Systems that brought up the back of the S&P 500, falling 17.8% after missing both revenue and profit expectations in its fourth quarter earnings. Fast food chain Chipotle Mexican Grill also sank by double digits, finishing the day 10.8% lower. In other corporate news, food delivery firm DoorDash has filed for an initial public offering, after being valued at more than $12bn in a funding round last year. The firm faces a skeptical environment for multi-billion dollar IPOs for businesses that are losing money. Listed rival GrubHub has lost a third of its market value since September and sunk to a loss in Q4.

The UK was caught up in the brutal sell-off on Thursday, with the FTSE 100 falling 3.5% and the FTSE 250 4.1%, on continued concerns of the economic impact of the epidemic. Reports that Boris Johnson has threatened to walk away from Brexit trade talks with the European Union also rattled markets. Travel names continued to fall sharply. TUI, International Consolidated Airlines Group and easyJet are down 23%, 17.4% and 26% respectively this week. Advertising giant WPP was the biggest faller in the FTSE 100, finishing the day 16.2% down after the firm put out a downbeat forecast for 2020. Chief executive Mark Reed said that it is currently too early to count the impact of the coronavirus epidemic on WPP but said that “our business clearly reflects developments in the global economy”. In the FTSE 250, Finablr, G4S and Playtech were the biggest losers yesterday, slumping 18%, 15.1% and 11.2% respectively.

The AES Corporation: Electric power firm AES operates in more than a dozen countries and had been on a strong run upwards since September until the recent sell-off hit. From the start of September to mid-February, the stock gained more than 30%, but has lost 12% over the past five trading days. The firm is dependent on weather trends, which will likely be a feature of its Q4 earnings call today, when analysts are expecting an earnings per share figure of $0.33. Currently, Wall Street analysts have an average 12-month price target of $20.86 for AES stock, versus its $18.29 Thursday close. The company offers a 3% dividend yield.

Wayfair: It has been a brutal year for online furniture seller Wayfair, which has sunk by close to 60% over the past 12 months, including 32% in the past month alone. Furniture companies are being hit hard by the coronavirus, as Chinese factories are facing major delays due to the disruption. Earlier in the month, the company revealed that it is cutting around 500 jobs, with 350 leaving from its corporate headquarters in Boston. Analysts are split between buy and hold ratings on the stock, with 12-month price targets ranging from $60 to $142. The expectation is for the firm to report widening losses in its Q4 earnings update today.

Vistra Energy: Another electricity provider reporting earnings on Friday is Vistra Energy. The firm has delivered a rollercoaster year to investors, including a near 25% slump since the start of November. Earlier this week, the firm announced that it has increased the company’s quarterly dividend by 8%. Analyst expectations for the company’s Q4, which it reports today, have been falling over the past three months, sinking from an earnings per share expectation of $0.79 to $0.54. Wall Street analysts favour a buy rating on the stock however, with 10 rating it as a buy and one as a hold. Last quarter, analysts quizzed management on details of a planned $500m annual investment in growth opportunities.

Cryptoassets continue to face heavy selling amid the growing global epidemic. Bitcoin is holding on at $8,713 this morning, off more than $1,000 in a week, while Ethereum is off 20% this week at $220 with volumes in futures spiking and reaching record levels on Hong Kong exchange FTX

Meanwhile the biggest mining equipment manufacturers are in a race to roll out their latest hardware in anticipation of the bitcoin halving this May. Bitmain’s two latest models would be the most profitable devices available, with rival MicroBT’s spec not far behind. Of course as with anything at the moment there is a coronavirus caveat in that supply and distribution could well be disrupted, particularly as both firms are China based.

All data, figures & charts are valid as of 28/02/2020. All trading carries risk. Only risk capital you can afford to lose.

, The Securities and Exchange Commission (SEC) announced yesterday that it settled charges against actor Steven Seagal for not disclosing...