President Donald Trump has already given the global economy trade wars. Now there are signs he may be gearing up for a currency war, too.

“Mario Draghi just announced more stimulus could come, which immediately dropped the Euro against the Dollar, making it unfairly easier for them to compete against the USA. They have been getting away with this for years, along with China and others,” tweeted. Later, he added: “German DAX way up due to stimulus remarks from Mario Draghi. Very unfair to the United States!” 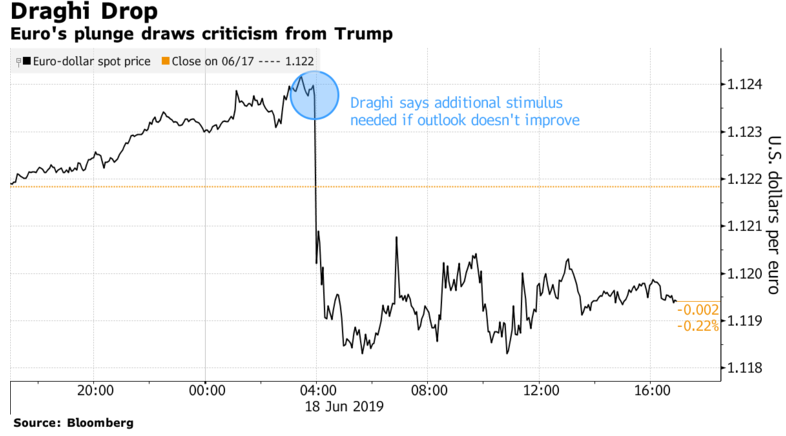 Acoording to Bloomberg, by targeting Draghi directly and responding in real time to an overseas central bankers’ policy pronouncement, Trump was dialing up the heat — just as his own Federal Reserve was gathering in Washington to decide on rates in a decision expected Wednesday. Coming just days ahead of a summit with other Group of 20 leaders in Japan, the salvo served to highlight his administration’s increasingly aggressive currency policies and the place he sees for them in his trade arsenal.

“They are preparing the ground, they are laying out the potential tools they may have at their disposal,’’ said Cesar Rojas, global economist at Citigroup Global Markets Inc., though he added “we’re not at a currency war just yet.’’

No more Huawei in America