Bitcoin (BTC): a reversal to a decline or buying the dips?

Bitcoin (BTC) was cautiously redeemed on Monday evening but lately stuck to $8000 level. However, so far the impulse has not received its development, showing signs of extinction. Bitcoin stopped near the round level of $8,000, which so far serves as a serious resistance. Nevertheless, it should be noted that earlier BTC showed a similar dynamics, gathering with forces around the threshold, and then swept away several levels of resistance on its way. Waves of demand this spring passed through round levels so that a truly strong FOMO can begin after the $10K will be passed. But the opposite is also true: without growth, the crypto market risks to fall under a new serious sale-off, as investors expecting prices growth “to the moon” often leave the ranks of optimists very quickly. 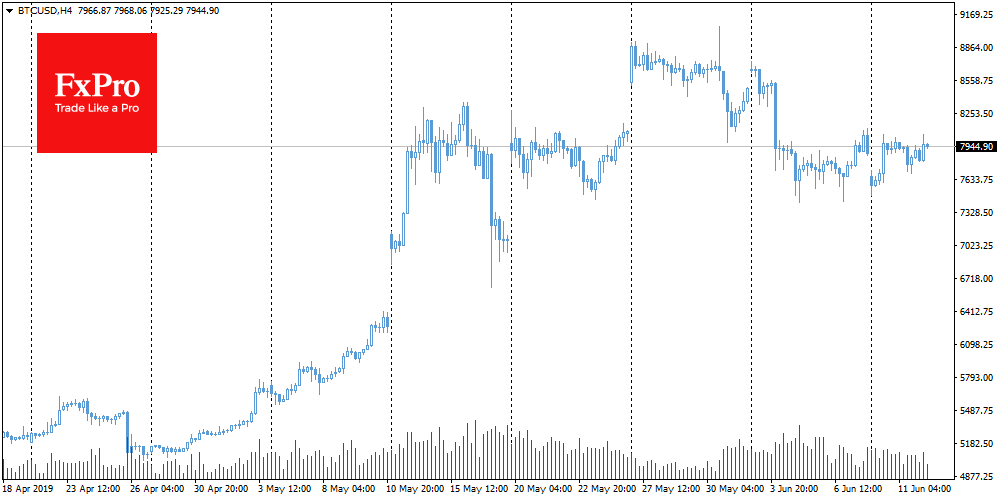 It is also worth noting the growth of trading volume after a decline from $9,000 to $8,000, which reflects the active transition of Bitcoin from hand to hand on a pullback from multi-month highs: some investors take profits from previous growth, the others redeem on declines. As for the technical analysis, it is worth paying attention to the formation of the “head and shoulders” reversal pattern. A decline below $7,400 can be an important selling signal for the market, which is very sensitive to the technical signals of the last months.

Against the background of cautious purchases, Litecoin (LTC) demonstrated a very remarkable dynamic. LTC has grown by almost 10% during the day and is trading at around $128. Over the month, Bitcoin’s “younger brother” has grown by 62%. Such a dynamic is simply explained: market participants are waiting for halving. Probably, this event is overvalued (expected on August 6), and as soon as everyone realizes that something large-scale did not happen, the coin will begin to sell off. However, in the medium term, a cryptocurrency can demonstrate impressive growth.

According to SimilarWeb, the crypto market is now experiencing a new wave of demand, as can be seen from the growth in traffic on the largest crypto exchanges. Economic uncertainty, trade wars, and corrupt political regimes are expected to contribute to the growth in demand for cryptocurrencies in Latin America, – LocalBitcoins reported. Taken together, these factors created the background for the exit of digital assets from CyrptoWinter.

During the first mainstream boom, many wondered: what is behind the growth of digital currencies, which brought them back to life after time following large-scale corrections. It turns out that the key is in the alternative to the traditional financial system, which appeared after the 2008 crisis. At the moment, many market observers are noting more and more analogies with the situation before 2007/08. All this pushes investors to search for alternative tools to diversify risks, and cryptocurrency is attracting more and more interest in this context. The most unprotected segments of the world’s population are also looking for ways to reduce their costs when transferring funds, they are also very attracted by the opportunity to make money easily on the crypto market growth, which is certainly what whales are using to get even richer at the background of bloated FOMO.

The market can get another chance for large-scale growth. However, the number of participants and funds in circulation will be incomparably greater than at the end of 2017. This reduces the chances of an equally sharp (in percentage) growth. Some investors, who are potentially interested in cryptocurrency, are already “in the market”; others, speculators, are looking for the right moment to take profit.