493
SHARES
1.4k
VIEWS
Share on FacebookShare on TwitterShare on RedditShare through Whatsapp

It is considered that if prices fall by 20% or more, then the asset moves to the territory of the "bear" market. In the case of oil, the situation is aggravated by the fact that the May peak was the most significant since the world financial crisis. Brent and WTI fell to 2008 levels, but is the US economy in recession? Not! On the contrary, it is ready to continue the longest economic expansion in its entire history and the Fed is on guard. If something goes wrong, it intends to loosen monetary policy. In such conditions, you begin to understand that prices have gone down. The market is oversold, which means that there is a reason to expect growth.

The escalation of the US-Chinese trade conflict and Donald Trump's intention to impose duties on all Mexican imports have heightened investors' fears about a reduction in global oil demand growth. According to the estimates of the consulting company Energy FGE, the figure may expand only by 1 million b/s in 2019. At the same time, Washington has already reached an agreement with Mexico and intends to sign an agreement with Beijing. The US president even threatens China with duties on all imports if Xi Jinping does not appear to meet him in Osaka at the G20 summit. Market's faith in the de-escalation of the conflict contributed to the 5-day rally of US stock indices, diverging from oil for some time that suggests some underestimation of Brent and WTI.

The lower fall of prices, the greater the chance that OPEC and other producing countries will prolong the agreement on production cuts by 1.2 million b/s at the end of June to the end of this year. Following the meeting between Saudi Arabia and Russia, it was noted that if this is not done, oil prices may fall below $40 a barrel. It seems that the main players are determined and they are not afraid of the fact that the Vienna agreement creates preferential conditions for American companies. However, the fourth in the last five weeks, the reduction of drilling rigs from Baker Hughes to 789 (-96 since the beginning of the year) indicates that not everything in the United States is in order with the production. 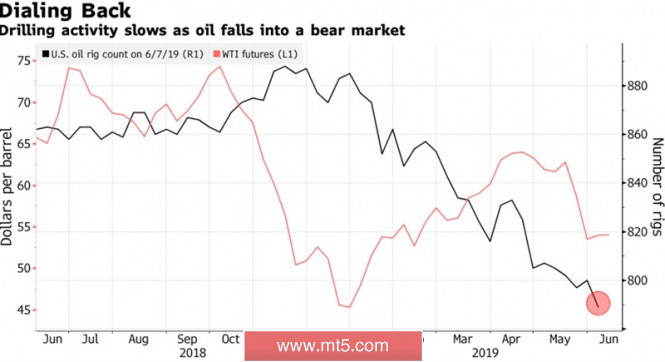 Yes, speculators reduce net longs for oil for the sixth consecutive week and brought the ratio of long and short positions to 4.4 to 1, which is the lowest value of the indicator for 12 weeks and has gone far from the current year's maximum mark of 14 to 1. However, all of these occurred against the background of the US-Chinese and US-Mexican conflicts. Improving the situation will change the outlook of investors.

Technically, in the case of updating the June low risks, Brent continues to peak in the direction of $50 per barrel and below as part of the implementation of the 5-0 pattern. In order to return the initiative to their own hands, the bulls must raise quotes above $ 64.1. It turns out that the North Sea grade of oil will have a chance to draw consolidation and rise to the level of $ 68.5 per barrel. 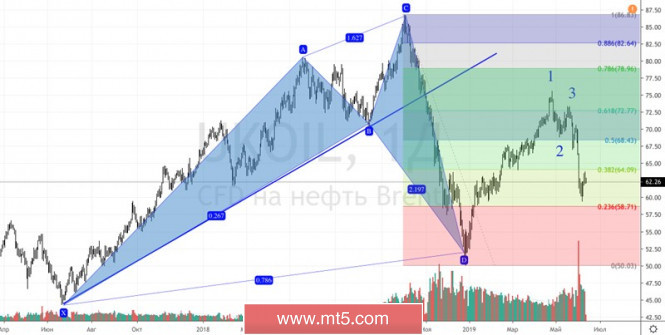 The material has been provided by InstaForex Company - www.instaforex.com

Gold managed to reach the $1350 area with an impulsive non-volatile bullish pressure and formed Double Top pattern. It may...

The euro managed to assert strength against the greenback residing above the 1.1300 area with a daily close. The weak...

The absence of any new picks between the United States and China against the backdrop of a global trade war...

USD/JPY has been consolidating and struggling at near 108.50 following an impulsive non-volatile bearish trend since the bullish rejection off...