The absence of any new picks between the United States and China against the backdrop of a global trade war has somewhat reassured financial markets. On this wave, stock markets resumed upward momentum, although the growth rate present earlier declined slightly.

The lack of agreement between Washington and Beijing continues to be the main negative factors for financial markets. Uncertainty and a high probability of continuing escalation of the trade conflict, which was actively fueled by political opposition, has restrained investors from the desire to take decisive action in the markets. True, the expectations of a decline in interest rates by the Fed that grew last week already this year have somewhat softened trade conflicts between the States and their main partners in the world but does not exclude the influence of these global problems. In practice, we can say that investors will continue to follow closely the economic statistics coming from America, which the Fed will actually force to reduce the borrowing cost or eliminate this possibility at least.

Today, investors will be attracted by the publication of producer price index data in the USA. It is assumed that the figure will decline in growth to 2.0% from 2.2% on an annualized basis and its monthly May value will fall to 0.1% from 0.2% in April. The value of the basic producer price index should also fall to 2.3% in annual terms from 2.4%. However, on the contrary, the May forecast value should grow by 0.2% against the April increase by 0.1%.

Despite the fact that in recent years, the markets have begun to almost completely ignore the published data on industrial inflation as the attention of the Fed itself overwhelmingly focused on the values of consumer inflation. These figures can be a catalyst for a new surge of optimism about the expected lowering of interest rates in the US and lowering the dollar rate. If it demonstrates lower values, which will be a confirmatory factor of slowing down the general inflationary pressure, may force the US regulator not to delay the lowering of rates.

Forecast of the day:

The EUR/USD pair is trading below the resistance level of 1.1320. If the data of industrial inflation in the United States are worse than expected, this may lead to local growth of the pair to 1.1350.

The AUD/USD pair remains in a short-term uptrend. It may turn upward and grow to 0.7010.against the background, perhaps to the weaker value of 0 in the industrial inflation from the USA. 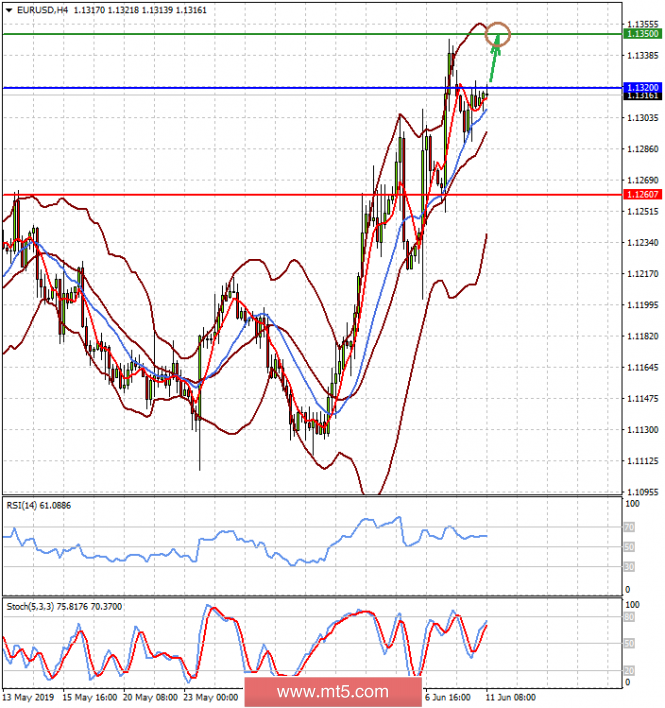 The material has been provided by InstaForex Company - www.instaforex.com

Technical Market Overview:The EUR/USD pair did not move much as the bulls have pushed the price a little bit higher...

Technical outlook:We have presented the daily chart view for EURUSD as the single currency pair remains unchanged around 1.1310/15 levels...

It is considered that if prices fall by 20% or more, then the asset moves to the territory of the...

Gold managed to reach the $1350 area with an impulsive non-volatile bullish pressure and formed Double Top pattern. It may...